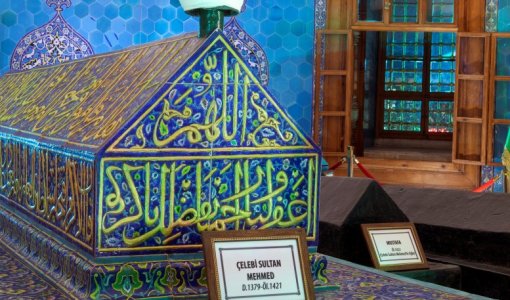 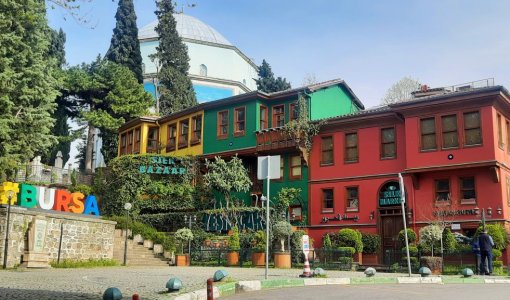 This mausoleum, which is the most known within “Yeşil” Kulliye complex, was built in 1421 by Çelebi Sultan Mehmed at the south of “Yeşil” Mosque, on a hill. Its sponsor is Hadji Ivaz Pasha. This mausoleum is  called “Yeşil”, or “Green”, thanks to the blue-, green- and turquoise-coloured glazed Iznik tiles, “ceramics whose manufacturing was impossible” according to literature.

This mausoleum has a crypt separated by walls into five sections. Its octagonal body. Including its high tamboured dome, which sits on Turkish triangles, the mausoleum’s total height is 25.50 m. On its outside façades and on its windows’ pediments, there are blue-white glazed tiles, and “hadîths” writings.

In its wooden door built with the marquetry method without using a single nail (“kundekari”), there is the wording “Amel-i Hacı Ali bin Ahmed-i Tebrîzî”, stating the name of the kulliye’s master craftsman for fine woodwork. The other master craftsmen are miniaturist Nakkas Ali bin Ilyas Ali, and Mehmed el Mecnun, respectively.

Up to a height of 3.00 m, the structure’s inner walls are covered with glazed tiles. In every main wall, there are two two-piece windows. In the dome’s tambours, however, there is one window each. The rectangular windows are surrounded by bordures made of glazed tiles, and there are verses from the Quran and traditions written on the pediments of the pointed-arched windows. The spaces between the windows are decorated with “salbekli semse” motifs.

In this mausoleum, there are nine sarcophagi. The sarcophagus of Çelebi Mehmed placed onto a platform, and its mihrab with six rows of stalactite work are covered with yellow, dark-blue, and white raised glazed tiles. The other sarcophagi are those of the sons of Çelebi Mehmed, Prince Mustafa, Prince Mahmud, and Prince Yusuf, and of his daughters, Selçuk, Sittî, Ayşe, and Hafsa Sultan, as well as of their foster mother, Daye Hatun.

Lastly, restoration work was started in 2005, and the mausoleum was opened to the public in 2009.