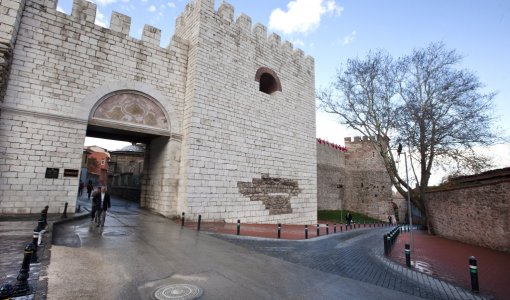 This gate is the gate in the south-eastern section of Bursa Castle. In historical Ottoman documents, it is referred to as “Bab-i Zemin”. It is situated about 100 m ahead, after having passed through “Tahtakale” Gate and entered the corridor between the two town walls.  It is the first town gate of the inner town walls when coming from this corridor into the town. The town walls, which are built from “Yerkapi” Gate, being situated 440 m ahead of “Fetih”, or the “Conquest”, Gate and continuing to “Zindan”, or the “Dungeon”, Gate, as a double town wall, in order to strengthen the town’s defence. We can see at the walls of the inner town walls, with one outer and one inner tower, that quite big quantities of folded materials were used.

As “Sultanate” Gate, “Yerkapi” Gate, too, sustained damage in the 1855 earthquake. It is known that, in the past, this gate, built over cyclopean stones, had a door case, was arched, and two-winged. It is understood from archive documents that there also was a gateman employed in the early 19th century.

This gate was re-built in 2007 by Osmangazi Municipality, according to its original plans.