This hamam, or public bath, was built in the late 15th century by Mesih Mehmed Pasha, with the purpose of providing income to his mosque, soup kitchen, and madrasah in Gallipoli. Mesih Mehmed Pasha was one of the grand viziers of Sultan Bayezid II (1481-1512). As a person called Mevlana Nasuh was engaged in its construction and assumed the waqf’s administration, this hamam was called “Nasuh Pasha” hamam by the people.

This structure is built with a rectangular plan, situated in north-south direction. The initial building was a “double” hamam. Later, one section was annulled, and it thus became a “single” hamam. This hamam consists of a cool room (frigidarium), a warm room (tepidarium), and a hot room (caldarium) section, as well as of washing cells, a water reservoir, and a “kulhan” (or boiler room) section. 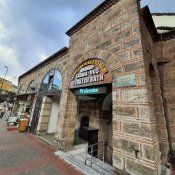