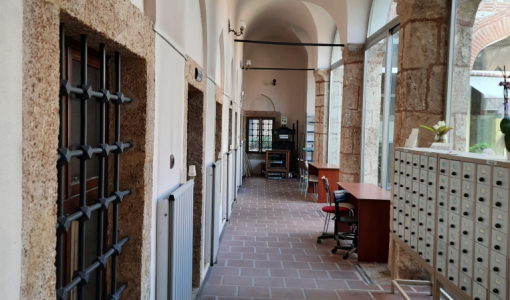 This madrasah was built in the early 15th century by Eyne Bey (Inebey), commissioned chief-officer of Murad I, responsible of the town’s security, and one of the important personalities of the Yıldırım Bayezid period. A waqf charter from 1404 states that it was issued for this madrasah by Eyne Bey (Inebey) for the “zaviye” (hermitage) in Balıkesir. Access to this madrasah’s entrance is made with several steps. Therefore, it is also known as “Merdivenli Medrese”, or the “Madrasah with the staircase”. Due to repair work performed in 1674 by Huseyin Aga, a cousin of Veziriazam Fazıl Ahmet Pasha, it is also called “Huseyin Aga” Madrasah.

The walls of this structure are masoned using rubble stones and bricks, and it is completed with two rows of sawtooth eaves. It consists of nine rooms, one classroom, a library on the upper floor, and the toilets. The classroom with its square plan measuring 6.20 x 6.20 m is covered with a single, lead-plated dome. The riwaq is built with pointed arches built on a total of twelve columns. Each room has an oven, two small niches each, as well as one chandelier and one cabinet each. The distinctive feature of this madrasah is its library. Furthermore, there is a fountain framed by pointed arches in the structure’s western wall. The mirror stone is made of marble, the basin, however, of sedimentary stones.

In 1969, when manuscripts and printed books in Arabic letters of Orhan Mosque were transferred here, the building started to render services as “Library for Bursa Manuscripts and Ancient Printed Works”).

This madrasah was renovated in 1674, 1678-1679, and 1965, respectively. After the restoration made between 2007 and 2010, it today still renders services as “Bursa Yazma ve Eski Basma Eserler Kütüphanesi” (“Library for Bursa Manuscripts and Ancient Printed Works”).