The construction of the Complex was started by Yıldırım Bayezid in 1390.

Considered as one of the most brilliant architectural complexes of Bursa, the complex has drawn the eastern boundary of the city and became an important education centre of the period with its madrasah and hospital (darussifa). It certainly was the most 'complete' complex originally containing a mosque, madrasah, public kitchen, and a Turkish bath. All buildings in the Complex were built according to the topography of the area. Because water was brought to the region before the construction of the Complex, settlement in the area became dense.

Similar to other mosques of Sultan complexes this mosque also has a “⊥” plan and is the first architectural example of the “Bursa Arch”, as defined in architectural literature.

The tomb was built in 1406 and also contains the coffins of the sultan's wife and one of their sons. The hospital (Darussifa), serves as an ophthalmic hospital. The imaret (public kitchen) did not survive. However once a public kitchen the area still gives public services with a school that built at the same location. The Complex has given its name to the neighbourhood.

Located in the site which was inscribed on the UNESCO World Heritage List in 2014. 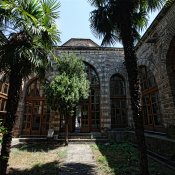