Osman Gazi, the founder of the Ottoman Empire, who is the name-source for the Ottoman dynasty.Orhan Bey buried his father, Osman Gazi (1258-1326), after the conquest of Bursa in 1326, inside a building called “Gümüşlü Kubbe”, the “Silver Dome”, fulfilling the latter’s last will in doing so. This structure was called “Silver Dome” by Osman Gazi was a Byzantine chapel, whose lead-plated dome – seen from the far – was shining under the sun during the besieging of Bursa. Today this structure, which shelters the tomb of Osman Gazi, is built where the place of the chapel of the St. Elias Monastery was situated, known to have been existing in this place since 11th century. This chapel, converted into a mausoleum by the Ottomans, sustained major damage in the 1801 fire, and in the 1855 earthquake, respectively. In 1863, it was re-built by Sultan Abdulaziz. This mausoleum is, built with an octagonal plan. The sarcophagus with its nacre marquetry on timber, in the centre of this mausoleum is the one of Osman Gazi. Among the 17 sarcophagi inside this mausoleum, there are also those of Alaaddin Bey, the son of Osman Gazi, of Asporça Hatun, the wife of Orhan Bey, and of İbrahim Bey, their son, as well as of Savcı Bey, the son of Murad I. This mausoleum was renovated in 1801, 1863, 2004, and in 2009.

Orhan Gazi is son of Osman Gazi and conqueror of Bursa. This structure, which shelters the tomb of Ottoman Sultan Orhan Gazi (1281-1362), who conquered Bursa in 1326, is built where the church of St. Elias Monastery, known to have been existing in this place in the 11th century. There are some mosaics, remains of the Byzantine period, traces of which are still found today in this mausoleum’s flooring, proving the existence of this church. This structure was completely destroyed in the 1855 earthquake, and re-built by Sultan Abdulaziz in 1863. The mausoleum of Orhan Gazi being built on its old location has a square plan.

Located in the site which was inscribed on the UNESCO World Heritage List in 2014. 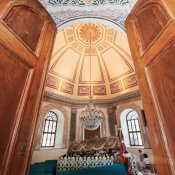 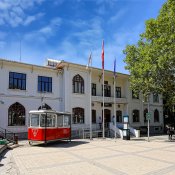 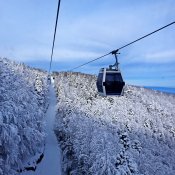