This structure, also known as the Grand Hamam, is one of the three most important baths in İznik. This bath, located on Atatürk Street, was built between 1450-1500. It is also known as the I. Murat bath. The hot part of the building, which has a double bath plan, has a malakari decoration. Brick wall technique was used in the bath.

The bath is a double bath, built as a men's and women's section. It consists of the coldness, which was settled on an octagonal hoop carried by symmetrically placed oyster motifs, the warmth, which was covered with mirrored vaults, the warmth rooms and private rooms. In addition, the cold water tank and the furnace covered with barrel vaults extending east-west are among the other parts of the bath. Cut stone, rubble stone, brick and the stones from the Roman and Byzantine periods were also used in the main walls of the building. The historical building was brought to light again with the excavations and restoration works carried out in 2006-2007. In addition, a tile bazaar is built around it and serves with Iznik city miniature inside. 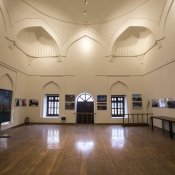