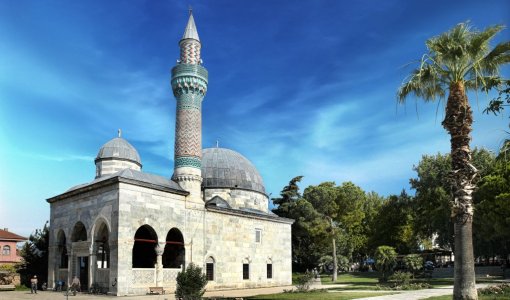 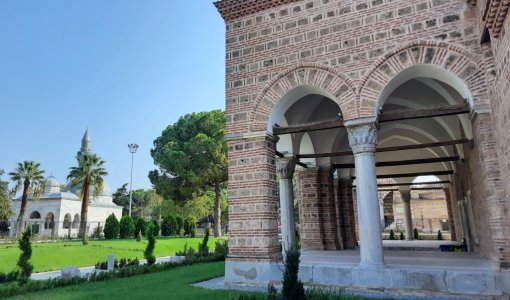 There are two current epitaphs for the mosque. The construction of the mosque that was architected by Hacı bin Musa (the second known architect in the Ottoman architecture) was started by the Vizier Halil Hayrettin Pasha in 1378-79 and completed in 1391-92 by his son Grand Vizier Ali Pasha upon his death (died in 1386).

The Green Mosque is the first representative among the central-dome structures that have a monumental qualification in the Ottoman architecture. The structure consists of a main rectangular space with a porticco courtyard .  The main space was extended towards north through three arch expansions on two columns. The extension of the main space towards north was implemented in this structure for the first time. The repeatition of the porticco courtyard within the structure gave monumental appearance to the mosque externally.

There are remarkable stone decorations with marble embossing at all points within the structure. The mihrab, which is intensely decorated, is recognized as one of the important examples of stone masonry in the Early Ottoman Period. The use of ashlar stonework is observed on the facades of the mosque created with yellowish large marble blocks. The railings surrounding the entrance area are made of marble, engraved a jour and decorated with geometrical patterns. These railings were destroyed in the Greek invasion during the War of Independence. In the restoration works conducted after 1961, they were re-built according to the original version of the structure based on old photos. Tile decoration was only used on the minaret.

The mosque is called as green due to the green, purple, cobalt blue and sky blue tiles on the minaret. The pattern of the decoration figure consists of geometrical transitions. Most of the tiles were renovated during the restoration. Only the lower sections are authentic. This tile minaret is a very good example that maintains the Seljuk minaret tradition that conveyed by Turks from the Central Asia to the West in the early Ottoman art.