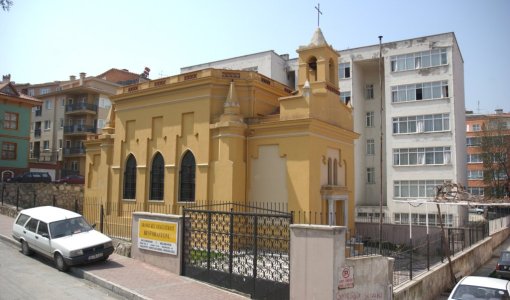 This church is built in the late 19th century by tradespeople of French origin, living in Bursa. They were members of the Order “Filles de la Charité", or “Sisters of Charity”. It is known that the decoration of this structure was made in 1927 by Prosper Lamerand, padre of the Assumptionist Order, and a Russian painter.

French Catholic Church is built with a rectangular ground plan, and with a single nave (section which extends perpendicularly to the apsis).

The façades of this church have a simple body structure. Thanks to the levelled steeples rising over the structure’s main walls, its windows with pointed arches, and its Gothic style bestow dynamic upon this structure.

After 1960, this church was not used anymore. In 1971, it served with its original function for a short while. With the aim to reflect also this aspect of Bursa from the point of view of architecture, a city, which has a social structure consisting of different religions, languages, and cultures, this church was restored in 2004 by Bursa Metropolitan Municipality, as a structure with a social, cultural, and worshipping function.