This hamam, or public bath, was built in the late 14th century by Oruç Bey, the son of Demirtash (Kara Timurtash) Pasha, for the latter. Kara Timurtash Pasha was one of the statesmen during the reign of Yıldırım Bayezid. From those structures, which were built as a kulliye complex, only the mosque and the hamam survived to date.

This hamam is a “single” hamam, built in east-western direction. It is built with a rectangular plan. . With its almost 16 m in diameter, this cool room’s dome is the second largest dome built by the Ottomans until the late years of the reign of Murad II. From here, the bather passes to the vaulted and domed warm room section (tepidarium), and from there, to the hot room section (caldarium), passing through a large arch. All marbles and stones used for this hamam, which went rack and ruin in the 16th century, were sold to Grand Vizier Rustem Pasha in 1552, and used in the construction of the “Yeni Kaplica” thermal bath. Last renovation works with this structure, were made in 2010. 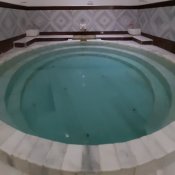 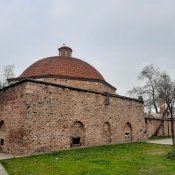