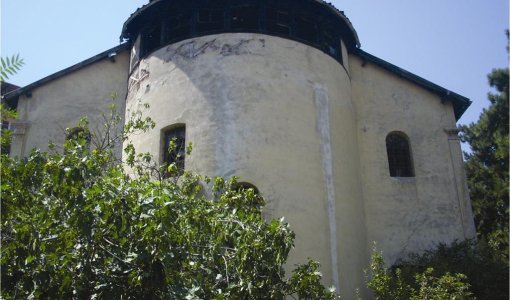 This church was built during the reign of Orhan Gazi (1326-1359), in remembrance of the archangels Michael and Gabriel. With its original name, “Taxiarhon Church”, it is an old Greek Orthodox church. But as this church is situated in the Demirkapı neighbourhood, it is known as “Demirkapı Church”. It is one of a rare number of churches in Bursa, which still exist. Vasileios I. Kandes wrote in his book called “E Prusa”, or “Bursa”, published in Athens in 1883, that this structure was one of six churches in the Bursa region, where the Mass was said in Turkish. In this book, it is furthermore stated that this church, at those times, counted a congregation of 151 couples (families).

This church is built in east-western direction, and with a basilica-shape ground plan. It has a wooden hipped roof, covered with roofing tiles.

On the initiative of Kyranthimos, this church was repaired in 1835 by Sultan Mahmud II.

In the early years of the Republic, however, the church lost its congregation due to an agreed mutual expulsion. In 1926, it became the property of the Yılmazipek family, and until 1985, it rendered service as a factory where silk was spun, and where fabrics were woven.