“Bey Saray” Palace was constructed in 1326 by re-arranging and enlarging the Byzantine Governor’s Palace by Orhan Bey who conquered Bursa. The area, on which the today’s structures used as the Officer’s Club (“Orduevi”) is situated, is the area, in which the Bursa Governor during the Byzantine era lived. This palace’s area situated inside the settlement of the Byzantine era castle being surrounded by town walls, is called “İç Kale”, the “Inner Fortress”, and was protected by a separate town wall surrounding it.

During the Ottoman period, and until the early 15th century, this palace was used by Orhan Bey, Murad I ”Hudavendigar” (the “Sovereign”), and Yıldırım Bayezid. After the defeat of Yıldırım Bayezid by Timur in the Ankara War, it was plundered, and also its two-winged wooden door with metal craftsmanship was brought to Tabriz. This palace’s door today is exhibited at the Hermitage Museum in Saint Petersburg.

It is supposed that this palace was renovated, and that some annexes were made in the 17th century, during the reign of Murad IV. It sustained damage in the 1855 earthquake, and disappeared over the years.

“Bey Saray” Palace is situated on a First Degree Protected Archeological Area. Only the wall at the west of Tophane Clock Tower and the wall between the Officer’s Club (“Orduevi”) and the “Tophane High-school for Vocational Professions” survived to date. 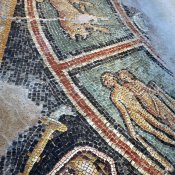 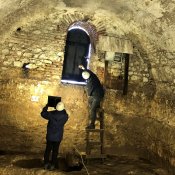