This hamam, or public bath, was built prior to 1490 by Hadji Hasanzade Kazasker Mustafa Efendi, a high judiciary official, in order to provide income to his mosque and his madrasah in Haydar, Istanbul. As this hamam was built while Mustafa Efendi was kadhi of Bursa, and as most of the mutewallis, or waqf officials, were kadhis and hodjas, this hamam was called “Kadi Hamam” (the “Kadhi Hamam”). This hamam is also known as “Pershembe Hamam” or “Hamam-i Atik”.

This small-scale structure is a “single” hamam built with a rectangular plan situated in east-western direction. This hamam was in operational state until the 1950s. Later, its cool room section was diagonally cut during road enlarging work. While, after this period, this structure was used as a dyer’s shop for a while, it was repaired in the 1980s, converted into a covered market, and shops were built around it. 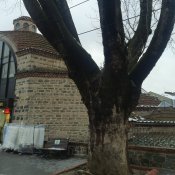