Lokma dökme (frying dough pastries), known by the names of Lokma, Hamur (Dough), Pişi, Mekik, Kabalka are the traditional practises are carried out in death traditions, charity tradition, customs about vowing to sacrifice an animal and traditional culinary practices.

Lokma is cooked and distributed in Bursa on special days, during traditional practices such as charity and fulfilling vows, within the traditions of death. Today, village women in villages carry out this practice collectively. In the city center, lokma cooking companies were established in order to meet the needs and carry out the tradition. On Fridays, at Kandil nights (five İslamic holy nights at which Muslims perform special prayers and recite Qur'an and ask forgiveness for their sins. The name "Kandil" means oil lamp; these nights are called Kandil nights because of the tradition of lighting oil lamps on the minarets in Ottoman time) offerings and lokma, are distributed usually near Ulucami, in crowded squares, in front of the Grand Bazaar and Khans District, Emirsultan and historical mosques, and a queue forms to get these offerings. Those who receive lokma say: "May Allah accept your offerings or charity, May Allah convey the spiritual gains of this charity to the souls of your dead relatives". One does not tell for whom the lokma is distributed, without asking those who distribute the lokma; when asked, the name of the family is told, and the answer is: “For the dead”, “for charity”, “for the fulfilment of a vow”.

The tradition of Lokma is a ritual practiced not only for the dead people and anniversaries, but also in kandil nights and holy nights, in vowed charities promised to fulfill when one's wishes come true, and to get rid of worldly and spiritual troubles.

The lokma, in which flour, yeast, water or milk is used, is shaped by hand and fried in deep oil. It is kept waiting for the dough to swell, and black cumin is thrown on the swollen dough. They are shaped in palm sized pancake, small ring or walnut sized round shapes and fried in oil. 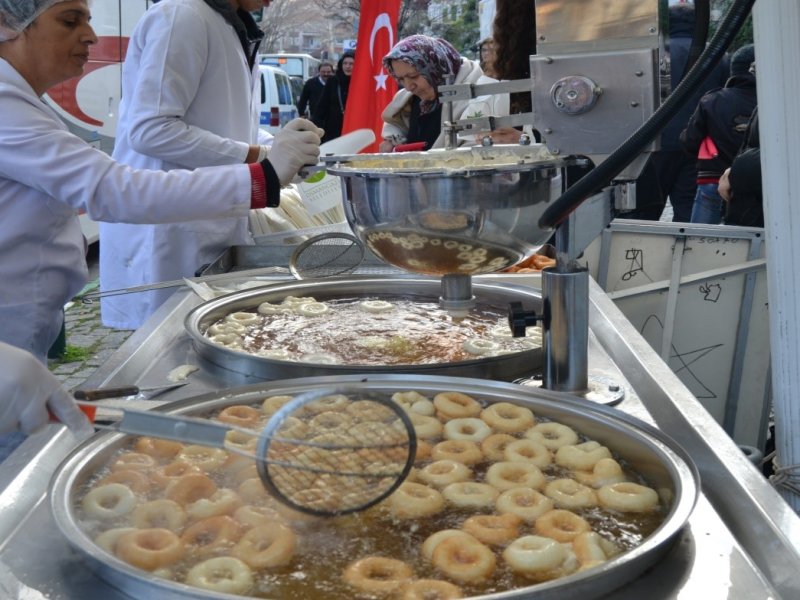