Wedding, which is one of the transition periods that shape human life, consists of ceremonies where traditions are intensely applied, to announce the status of people who will start a new life, to bless, to protect them from harmful effects that will occur. Visiting the girl's house to see the marrigeable girl, asking for the girl's hand to marry, engagement ceremony, dowry, the tradition of opening a new house, invitation to the wedding, henna night celebrations, tradition of attaching bright strings on the bride's head, bride bathing entertainment, consultation activities, taking the bride from her house (migrating, getting off), the wedding dinner, official wedding ceremony, the consultation, the hair throwing, bridegroom, groomsman, brideswomen, taking chicken, nuptial night custom, gifts for seeing the bride's face, bridal veil, giving presents, donations, circumcision bed and preparing henna for application are the practices carried out in weddings and the entertainments including circumcision ceremonies and celebrations arranged for sending the youth to military service.

In Traditional marriage practices, relatives of the bridesgroom ask the family of the girl whether they could allow their daughter to get married to their marrigeable son saying "we ask you to allow your daughter to get married to our son by the command of Allah and the word of the prophet". Preparing the engagement pack after a positive response was received from the girl's family, determination of the engagement date and announcing it around the neighbourhood, treats such as walnut bread and Turkish delight prepared for the engagement ceremony, gifts given between the girl's family and the man's family on religious feast days, dowry and wedding shopping in the covered bazaar are the preparations completed before the weeding ceremony. On the last Wednesday of the week before the wedding will take place, the bride's dowry is sent to the boy's house, a single girl sits on the dowry chest, she does not get up without taking tip, "the dowry is laid out", the laid dowry is visited for fifteen days after the wedding. The bridal bath is held in the bathhouse rented by the women of the girls' and man's family. The practice of inviting to the wedding is called “okuma”. Bread or Turkish delight with walnuts is distributed to the people to be invited, the man's family sends henna and cookies on the henna night held at the girl's house, henna and cookies are put in small bags and served to the guests. The bride is dressed in a colorful dress called "kınalık" (dress for the henna), henna is applied to the bride's palm, and "henna ballads" are sung with the tunes of women playing copper cauldrons or pans. On the henna night, the bride's friends go to the boy's house and "chicken taking" tradition is performed. On the wedding day, the men's party comes to pick up the girl with the "wedding procession", the drum is played in front of the house, a red ribbon is tied to the bride's waist, the door is locked to get a tip from the groom while the bride is leaving the house, the path is blocked and the bride's car is not allowed to pass until a tip is given. As the bride enters the car, rice, sugar and money are thrown on her head, and before entering the house, the father-in-law gives jewelry as a gift to the bride to wear. When the bride enters the house, she gives presents such as socks and scarves from her dowry to the guests. The bride's mother prepares a "groom's table" for the bride and groom to eat together, including cookies, baklava, a whole chicken, fruit, fruits etc. and puts them in the bride's room. One day after the wedding, “trotter soup day” is held. The bride wears her wedding dress by changing the clothes her mother-in-law bought. A week after the wedding, the bride goes to visit her mother, the mother-in-law prepares a dish called "groom's trotter" and his favorite dishes for the bridesgroom.

Various applications are made for young people who will go to the military in order to fulfill their military duty, which is seen as a national duty for each young man. Before going to the military service, the young soldier candidate's house is visited, the young candidate is given a gift or money. In the village rooms, theatrical games and various entertainments are held among the youth, and henna is applied on the hands of the soldiers during these entertainments. Young people who will go to the military are invited to dinner, their favorite dishes are prepared. One day before going to the army, a "military "ceremony" is held in the village square, a sacrifice animal is slaughtered for all the young men who will go in the same period, and several dishes are cooked with the meat. Participants of these entertainments mostly consist of men. 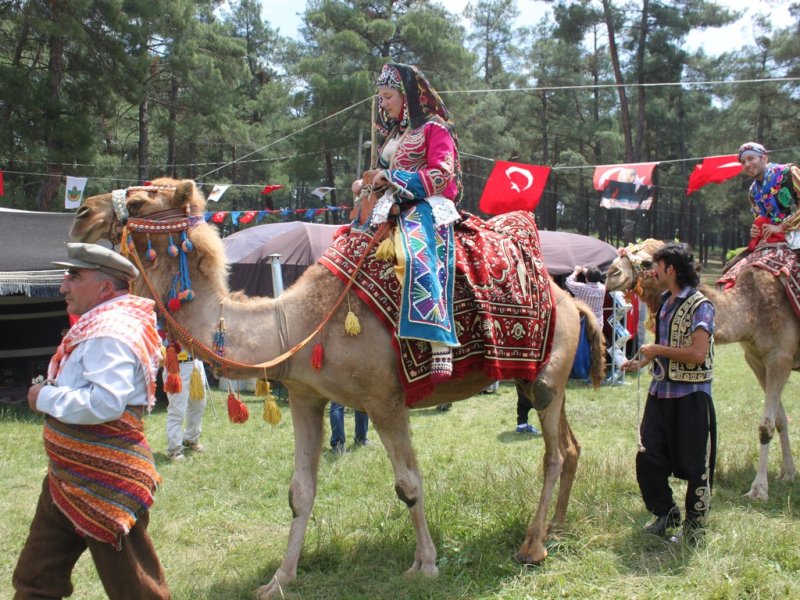